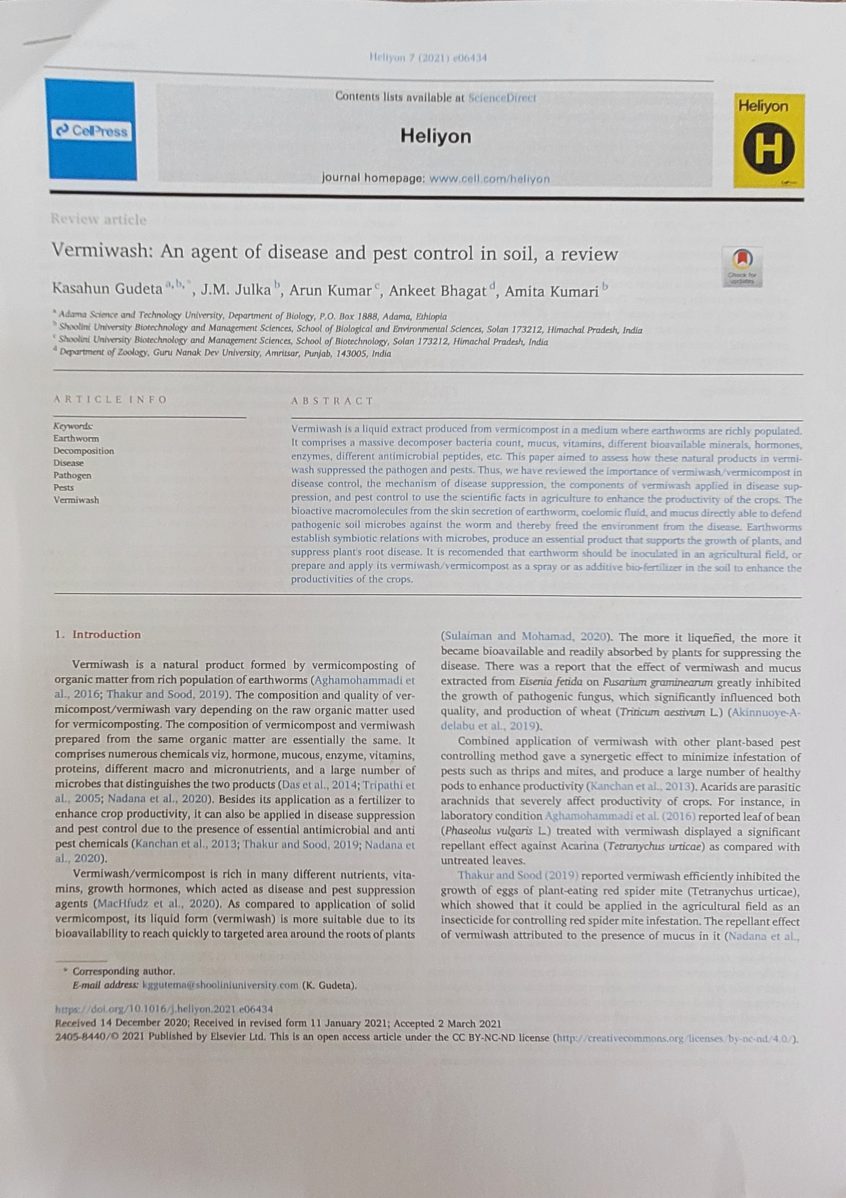 Vermiwash: An agent of disease and pest control in soil
Unpacking the role a vermiwash / vermicast plays in controlling disease and pest burden in agricultural crop production.
A vermiwash contains many different compounds, including very high numbers of bacteria (particularly bacterial decomposers), fungi, bioavailable minerals, hormones, enzymes, antimicrobial peptides, mucus (from worms), proteins and vitamins to list a few.
Vermiwash is the liquid produced from a vermicompost system, a vermicompost being a composting system containing organic matter and densely populated with worms and the quality of both is dependent on the raw material used to form the compost.
Vermiwash is the liquid collected after water passes through a vermicompost, research has shown the vermiwash contains more bioavailable components compared to vermicompost.
Along with being used as a fertilizer to enhance crop production, a vermiwash also contains insecticidal, antifungal and pesticidal compounds with qualities to help protect plants and crop productivity.
The role of worms –
• Clean up pathogens in soil
• Collect heavy metals in soil and store in their bodies
The role of decomposer bacteria –
• Produce metabolites that suppress pathogenic bacteria and fungi
• Out compete disease bacteria
A whitepaper examining the benefits of a vermiwash as a disease and pest control method highlighted the following outcomes. 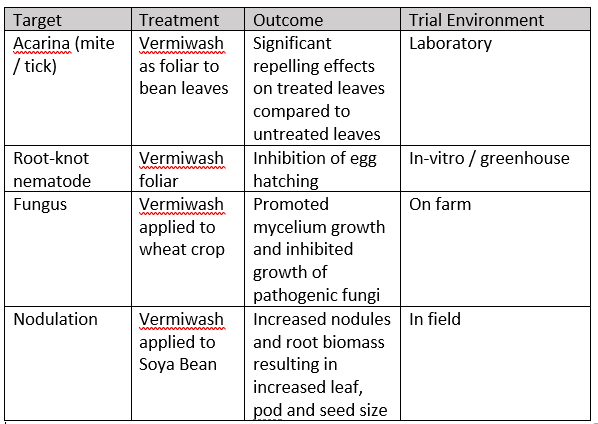 Trails have shown a vermiwash aids in suppressing pathogenic fungi, mites and other diseases and pests

Summary
Trials carried out on the disease and pest control capabilities of a vermiwash provided evidence that the components of a vermiwash can help suppress pathogens and pest activities on plants.
Vermiwash contains bioactive molecules secreted from the skin of worms, these play a variety of roles to support plant growth and suppress production reducing environments. This takes place through
• Vermiwash is contains readily available vitamins, nutrients and growth hormones to support plant growth, productivity and reduced biotic stress
• Vermiwash contains high count of decomposer bacteria which suppress pathogenic bacterial and fungal activity
• Beneficial enzymes, hormones and microbes to enhance soil health and nutrient uptake, improving root length, root number, shoot density, leaf area and other vegetative parameters
• An abundance of micro and macronutrients producing an environment which makes it inconvenient for pathogens to survive and grow
• Contains higher concentration of available soluble nitrogen aiding legumes with the rhizobia colonisation and therefore improving nodulation and root disease suppression.

Rachelle grew up on a dairy/beef property in Yackandandah, Victoria. She studied Health Science with Honours in Public Health before living and working in Sri Lanka for 3 years as a Community Health Facilitator. Rachelle then worked as a Youth & Community Development Officer for 3 years with the Shire of Nannup. Her father, Graham Maddock, an innovative farmer, developed vermiculture (worm) products in the 1980s, now known as NutriSoil. Eager to support the connection of food production and human health, Rachelle helped build the NutriSoil business which uses education and networking to heal the world from the ground up.